Caleb’s story is incredible. He was raised by three activist gay parents. And then he became a follower of Jesus. He told that story in his book Messy Grace. Now, with a rapidly shifting society, how do Christians present Messy Truth? Can we create a culture of belonging without sacrificing theological convictions? Don’t miss Chris Fabry Live. 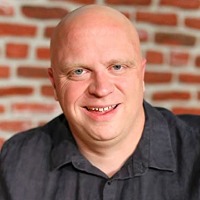 Caleb Kaltenbach is the executive director of the Messy Grace Group and a research pastor at Shepherd Church (Los Angeles). He is the author of Messy Truth, God of Tomorrow, and Messy Grace, which shares his story of being raised by three activist LGBTQ parents, accepting Jesus, and seeing his parents trust Jesus. Caleb speaks widely on issues of faith, reconciliation, and sexual diversity. A graduate of Talbot School of Theology at Biola University, he received his doctorate from Dallas Theological Seminary. Caleb and his wife, Amy, have two children and reside in Southern California.