You’ve heard the story of the Olympian who won gold in 1924. He’s famous for the race he didn’t run, as told in the movie Chariots of Fire. As the storm clouds of war rolled in, Eric Liddell made purposeful life decisions. His faith story, his hope in the face of uncertainty, and his resilience against great odds will encourage you. Don't miss this rebrocast of his story on Chris Fabry Live.​​ 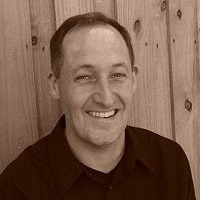 Eric Eichinger is an ordained minister in the Lutheran Church—Missouri Synod. He holds degrees from Michigan State University (BA), where he ran varsity track &amp; field, and Concordia Seminary (MDiv). Prior to his pastoral call, he served with World Mission for two years in China. Some of his additional writing can be found in the GodConnects series, where he wrote with a team of writers for The Lutheran Hour. In 2006 he was ordained into the office of holy ministry in the Lutheran Church – Missouri Synod and currently serves as Sr. Pastor of Bethel Lutheran Church in Clearwater, Florida. Eric and Kara have three children and reside in the Tampa Bay area.