​Ray Whipps served as an infantryman under General Patton in the trenches of Normandy, Paris, and Belgium in World War II. Betty served as a field nurse in Cherbourg, France. They met and fell in love. But Ray was captured by German forces and sent to a POW camp. Hear their fascinating love story. 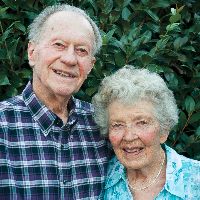 Ray and Betty Whipps met while serving in Europe during World War II and married in 1945. Ray and Betty settled in Portland, Ore., and spent 73 years of married life raising and enjoying their family of seven kids, 14 grandkids, 11 great-grandkids, and assorted neighbor kids. Ray passed away in April 2019.