​Think of the person you know who has worked for the same company for a long time. What have you learned from them? I’m talking twenty years. Thirty years. Do you know anyone like that? What about 40 years? Coming up Thursday on Chris Fabry Live, you’ll meet someone who has worked with Moody Radio not 40 or even 50 years. Chris’s pal, Ruth Dinwiddie, has been with Moody 60 years—and we’ll celebrate her service on Chris Fabry Live. 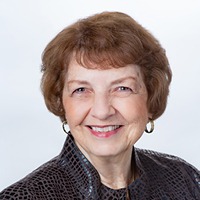 Ruth Dinwiddie, a native of Cleveland, Ohio, began her career in Cleveland with Moody Radio at WCRF, where she created a 15-minute daily program for women which aired on more than 100 stations. She also worked for Moody Radio in Chicago for 21 years, then came to Moody Radio Florida in 1991 as an on-air personality with the afternoon program Along the Way. After 46 years, Ruth retired her full-time position but continues to work part-time as office support and on-air substitute. Ruth holds a bachelor’s degree in music from Shelton College and is a graduate of Moody Bible Institute, where she studied Sacred Music. She sings with The Master Chorale of Tampa Bay, likes to travel and enjoys a good book.