​How are you going to make a difference in someone’s life in the next few weeks? We want to hear what you have planned for the remainder of 2019. President and CEO of Samaritan’s Purse Franklin Graham will talk about the effects of Operation Christmas Child on millions of children and families around the world. Then we’ll hear your story of “planned” difference-making. Don’t miss the encouragement on Chris Fabry Live. 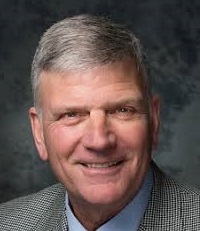 Franklin Graham, president and CEO of Samaritan’s Purse, is also president and CEO of the Billy Graham Evangelistic Association. The fourth of Billy and Ruth Bell Graham’s five children, Franklin is the author of several books, including the bestselling autobiography Rebel with a Cause and the 2013 release of Operation Christmas Child: A Story of Simple Gifts. He and his wife, Jane Austin, live in Boone, North Carolina, and have four children and twelve grandchildren.