Dr. Leighton Ford, a giant in the evangelical world, describes the Christian walk as a "life of listening." He has given a rich legacy of ministry to the church. And he believes we need to discover two things in today's world. One, we need to discern God's voice. And two, we need to find our own. Don't miss the life and legacy of Leighton Ford on Chris Fabry Live. 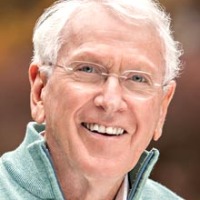 Leighton Ford is President of Leighton Ford Ministries, which seeks to help young leaders worldwide to lead more like Jesus. He served from 1955 until 1985 as an associate evangelist and later vice president of the Billy Graham Evangelistic Association and was featured as the alternate speaker to Billy Graham on the Hour of Decision broadcast. He served for nearly twenty years as chairman of the Lausanne Committee for World Evangelization, an international body of Christian leaders. The author or coauthor of numerous books, including Transforming Leadership and The Attentive Life, Leighton lives in Charlotte, N.C., with his wife, Jean.