Our guest today declares: "Despite the wrongs committed against China in the past, the People's Republic of China must not represent the future, for it is corrupt. Harking back to what Ronald Reagan did to spur the dissolution of the Union of Soviet Socialist Republics, the United States must enunciate that its objective is the peaceful end of the Communist Party of China. China existed for four thousand years before the formation of a communist junta within its borders; China can only achieve greatness combined with liberty and wealth if it frees itself from one-party rule and the despotism this type of government always brings.” America is doomed to collapse under a multi-pronged attack led by the PRC and by statists in our midst. We must return in great haste to the Judeo-Christian principles upon which we were founded, which made us the most prosperous, secure, and generous nation in human history. Don’t miss this crucial history lesson.

Hour 2: The Fight - The Right for Life

Join us for a full hour of news. We start with a quick look at the headlines and then hear from a physician on why the U.S. signing the Geneva Consensus Declaration was so important. We round out the hour by learning about an exciting project that advances the biblical idea that ALL pre-born lives matter. Prepare to join the battle. 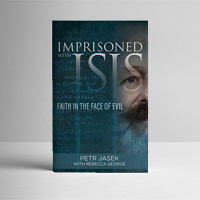 Imprisoned with ISIS: Faith in the Face of Evil by Petr Jasek

In America, Christians are beginning to discover what it means to be persecuted. But it doesn't come close to the suffering Petr Jasek endured. Detained by security at a Sudanese airport just before departing for home, Petr was questioned about his activity in the country and subsequently given a life sentence as "an enemy of the state." Your faith will be strengthened when you read about his grueling 445-day stint in a Sudanese prison before his miraculous release.

As a Parshall Partner, you help Janet bring biblical truth into the marketplace of ideas and will also receive exclusive resources from Janet!

Question of the Week:

As Scripture instructs us to pray for those in authority, how are you praying these days? What is God laying on your heart for our nation? Thank you for sharing your thoughts.